The Duchess gets personal! “Personal Love Vendetta” describes a relationship where both protagonists fight against each other and results in a vendetta when the “grass ain’t greener on the other side”. Jureesa gives a very believable performance on the title track; unsurprisingly as it is based on personal experience.

The EP is set out as a story; each individual track is a gem in its own right but also each is related to the others. “Karma” tells it like it is. Boy, you better believe what goes around comes around. Karma is a woman who wears high heel shoes. Watch out for those stilettos; ouch!

We move into the party groove with the funky “Just Move”. The bass and Duchess’ bluesy, soulful voice combine to urge you to move and groove. You can practically smell the sweat and smoke as the sound is reminiscent of the mid 70s in a basement bar with a crowded dance floor.

Duchess gets deep down and DIRTY in “She Got the Baby”. “He may be your baby’s daddy, but he’ll never be your man…” Classic Southern Soul in the style of the “Queen of the Blues”, Denise LaSalle.

Now Jureesa gives up her rap, Millie Jackson style then “sangs” the blues on “It Be’s That Way Sometimes”. Her man explains away his indiscretions with the song title but he underestimates his woman and she turns the tables by throwing his words back at him.

The EP concludes with an autobiographical track, “Blues Woman” that gets Funky, and some!

This EP left me wanting more. If you take your Blues and Southern Soul seriously, then this mini-album is an essential addition to your collection.
Paul T Forrest
(DJ Pauly)
Brighton, England
Cyrus Webb "Conversations Book Club"
AMAZON


This review is from: Can Still Make It (MP3 Music)

No matter where you live or what you try to do there will be situations you face that will challenge you and put you to the test.

In her single CAN STILL MAKE IT Jureesa McBride addresses some of these things (especially relationships), and let's the listener know that no matter where you can get through whatever comes your way.

"We were headed in different directions," she sings. "You tried to take it all for me. Now the only space for affection is with my daughters and my family." This shows that when things became rough she was able to turn to those who she knew would have her back. "Even birds that fly have broken wings," she sings. This reminds us that although a bird might be knocked down that don't stop. "When life knocks you down, you can get back up. You can make it through. I know you can... All you have to do is believe in yourself."

Knowing that you weren't built to break is the key to remembering that if you don't give up there will be other opportunities. All you have to do is believe


Whether live on stage or through her debut album, “I’m A Woman First, tales of The Duchess” Jureesa never disappoints.
“The Duchess” delivers her songs soulfully and as if she means business.
Live, The Duchess takes ownership of the stage. Jureesa is greatly influenced by some of the biggest names in R&B and Blues. Etta James is a clear favourite of our girl.


Jureesa has the guts and ability to take Etta’s classic “I’d Rather Go Blind” and make it her own. The Duchess spends time building the scenario, talking one-on-one with the ladies in the audience before launching into a powerful masterpiece of soulful wailing and moaning.


Another Etta James standard features in The Duchess’ live repertoire, namely “At Last”. Again, Jureesa takes the words and squeezes every drop of emotion into them.


The Duchess is equally at home belting out Elmore James’ thumping compositions, “Dust My Broom” and “Shake Your Money Maker”. And the dance floor fills up when Jureesa gets her uptempo Blues Groove on.
On the album, listeners get to really appreciate the versatility of Jureesa’s vocal talents. From the Deep down Southern Soul of “I Want To Be Your Super Mistress” to the Bluesy Boogie of “I’m A Southern Girl” The Duchess “Get’s Down to the Nitty Gritty”.
Jureesa is not afraid to hit hard in the “Grown and Sexy” groove either, with “Did I Lay It On You Right?” and “Put Your Cookie In My Milk” leaving listeners in no doubt about what she is singing.


So, my recommendation is – check out Jureesa “The Duchess” McBride, either live on stage or through her YouTube channel,  J.J.S. Records and get that album – you will not be disappointed.#


When it comes to sheer vocal talent, Jureesa McBride has it all: strength, range, diction and a deep yet sparkling tone. Even her breathing mesmerizes.

A native of Pattison, Mississippi, a hamlet near Vicksburg in the heart of the Delta, McBride's pipes earned her regional accolades even before her first single, "Let Me Be Your Super Mistress," hit the air waves at WMPR in Jackson in 2013.

Super Mistress (notice it wasn't just "any" mistress) was head-turning, culturally-speaking, even for chitlin' circuit audiences: a straightforward come-on to a married man by a "hot" female. No demands--only looking to be a "mistress"--sung with a genuine conviction that couldn't be mistaken for satire.

The provocative lyrics, in retrospect, obscured the production, which was excellent (although invisible as it should be). That excellence of production, courtesy of Donovan E. Scott (with Jureesa and mother Shirley listed as Executive Producers) is a major reason Jureesa McBride's debut CD--I'm a Woman First (Tales of the Duchess)--is a seamless success.

For example, McBride and Scott take the old "I'm A Man" riff, which has been covered thousands of times, and infuse it with crackling energy in "I'm A Southern Girl." It's an impressive cover.

"I'm A Southern Girl" and the catchy, swaying "Did I Lay It On You Right" charted on Daddy B. Nice's Top Ten "Breaking" Southern Soul Singles Chart in January and February of 2014.

Another track begging to be a single, the mid-tempo "Cookies In Your Milk," is perfectly executed, and the metaphor just may stick (Nellie Travis used "your cookie" in her duet with Adrena last year), while the uptempo "Southern Soul Swag" rocks with casual authority.

The opening and closing songs, "Woman First" and "I Can Still Make It," although obviously thematically important to the CD's concept, and just as obviously important to the artist, are nevertheless the only cuts where the production and Jureesa's hyper-emotive vocal go "a little over the top" from a Southern Soul perspective, verging on the histrionic, or what we call around here that "nasty old" slick urban r&b.

Born in Port Gibson, Mississippi, Juressa 'The Duchess' is a great singer/songwriter.

If you like your southern soul sexy and sassy, with lyrics we can all relate to, then don't miss The Duchess if she is playing at a venue near you.  I recommend you get yourself down there with your duchess for a taste of the real thing.

And don't forget to check out her latest CD.

Look forward to seeing you all again at the 2015 Jus Blues awards. 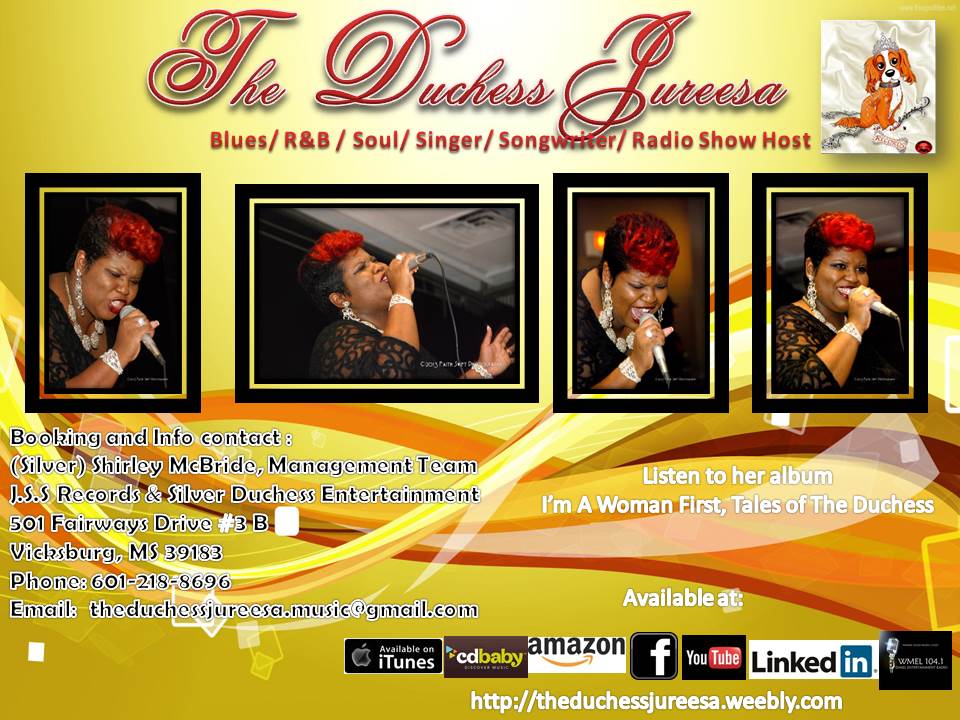 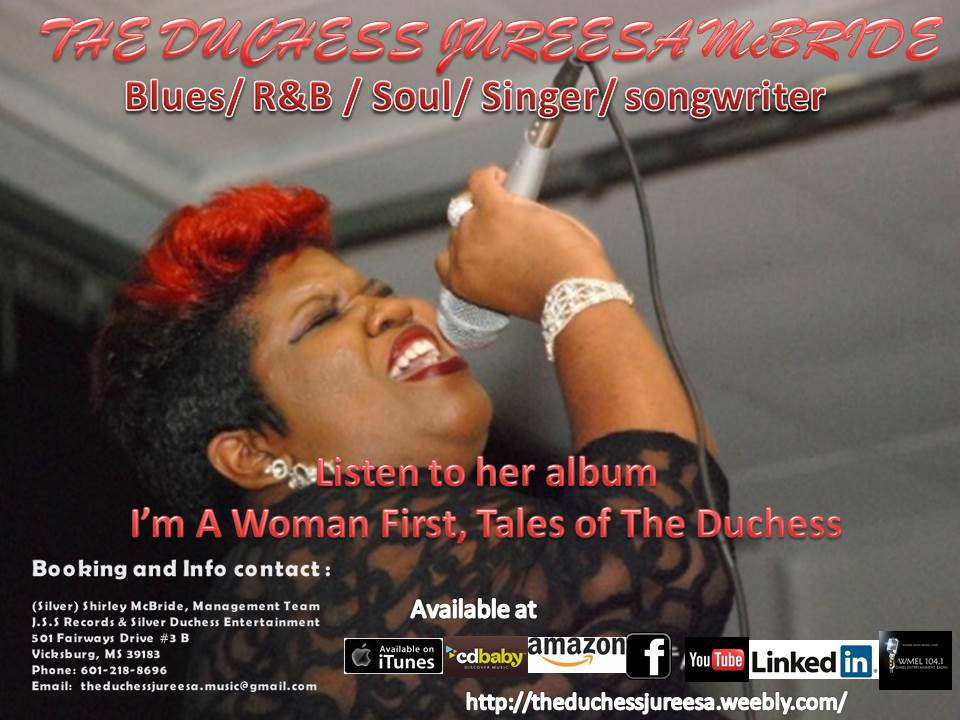